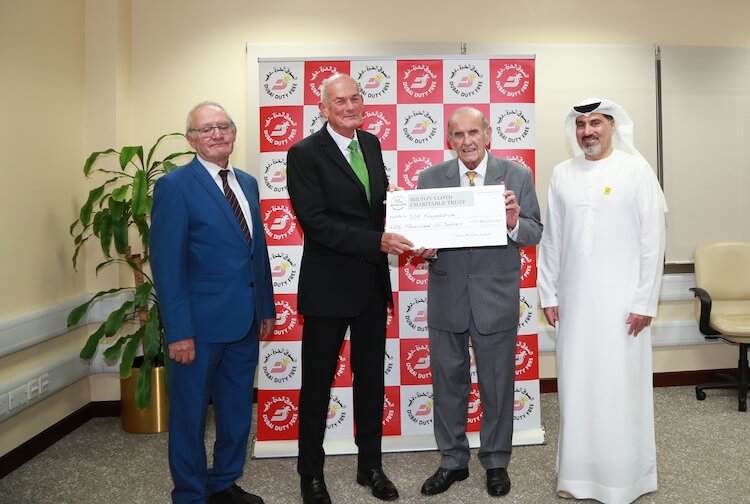 Milton-Lloyd Charitable Trust has donated US$50,000 to the Dubai Duty Free Foundation

As part of his personal 50th anniversary of so many perfumery sales’ visits to Dubai, and in recognition and appreciation of Milton-Lloyd’s long-standing relationship with Dubai Duty Free, Peter Jackson, founder of the UK perfumery Milton-Lloyd, presented a cheque of US$50,000 to the Dubai Duty Free Foundation from the Milton-Lloyd’ Charitable Trust on November 1.

Milton-Lloyd, a family-owned perfumery business founded in the 1970s, has built its reputation by offering luxury fragrances at affordable prices which are exported throughout the world. Milton-Lloyd became a Dubai Duty Free supplier in 1998 and out of the total mass perfume portfolio, is currently ranked number one.

Speaking at the cheque presentation to Colm McLoughlin and his colleagues, Peter Jackson acknowledged its long-standing relationship of almost 25 years with the airport retailer and said, "Thank you, Colm, and to Dubai Duty Free for such a fantastic support for Milton-Lloyd for many years. I wanted to mark my golden anniversary of regional travel in some way and I thought of you - a duty free legend - who together with our other friends in DDF have supported the growth of Milton-Lloyd fragrances for so many years, within the always visionary and ground-breaking Dubai Duty Free. So, to mark this 50-year milestone, we thought to donate US$1,000 dollars from our Charitable Trust for every one of my 50 years of travel to Dubai as a gift sincere respect to the great work of the Dubai Duty Free Foundation, which does so much good both in the region and throughout the world.”

Commenting on the donation, Colm McLoughlin said, “We are delighted to receive such a significant donation to commemorate this 50th anniversary and my thanks to Peter and his team for this donation. The DDF Foundation was established in 2004 under the auspices of H.H Sheikh Ahmed Bin Saeed Al Maktoum, President of Dubai Civil Aviation Authority and Chairman of Dubai Duty Free, with myself as Chairman. I am very proud of the work that we have achieved and I can assure you that the funds will be used for a number of worthy causes, particularly benefitting women and children.”