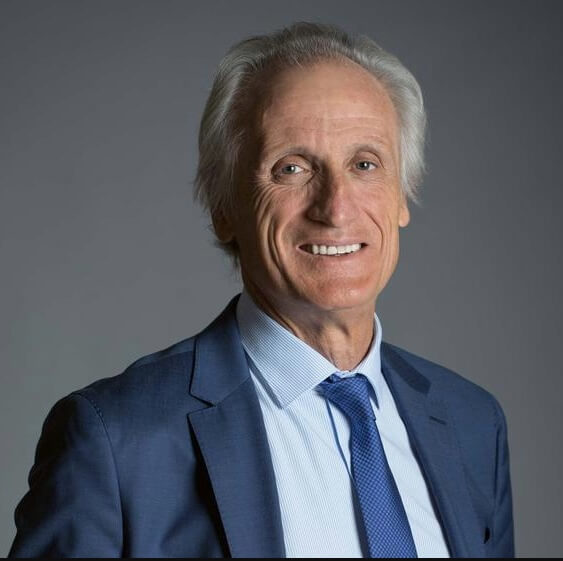 “I would like to express my gratitude to all of you, our stakeholders, and particularly to the Board of Directors and all colleagues at Dufry for the support I have received during the past 18 years. I am immensely grateful for the opportunity I had to lead and contribute to the development of this great company, and I am firmly convinced about Dufry’s prosperous future” – Julián Díaz, CEO, Dufry

Dufry issued a first-quarter 2022 trading update on 19 May – the final quarterly update to be given by Julián Díaz, as he prepares to step down as CEO on 31 May to make way for Xavier Rossinyol.

Dufry’s Q1 performance was characterized by continuous improvements during January and February, resulting in increasing sales trends in most regions globally from March onwards.

Performance during Q1 was driven by “significant progress” across the EMEA region and positive contributions from the Americas, especially the US and Central America & Caribbean

The company reported an uptake in commercial activity with 21,915 square meters of new and renewed retail space signed during the first quarter.

In an in-depth statement, Dufry Group CEO Julián Díaz commented: “Until the last week of January, the first quarter was still impacted by some travel constraints. Since February, we have seen an easing of restrictions and general improvement of the health situation. This translated into an immediate uptake in travel, and in travel retail as an integral part. The positive trend has so far continued into April and May, with contributions from nearly all regions globally. Comparing February year-to-date and April year-to-date, Dufry’s turnover has more than doubled. Within EMEA, the best-performing region has been the Mediterranean, but also Southern Europe and the UK have significantly progressed.

“Looking at the Americas, Central America & Caribbean, as well as the US, continued to trend above group average. The regional performance also started to be supported again by our South American operations, especially by Argentina, Colombia and Ecuador. Whilst most regions globally are experiencing an increasing sales trend, most of the APAC countries are still adhering to a zero-Covid policy. Consequently, most of the operations, which cater to international passengers, continue to be closed.

“Despite the typical seasonality of the business, Equity Free Cash Flow in Q1 2022 performed even better than pre-crisis Q1 2019 EFCF of CHF -123.0 million (-US$126 million). This result is positively influenced by the measures we have taken over the last two years, including concession reliefs and tighter cash management, with Q1 2022 also partly benefiting from working capital movements and some phasing of CAPEX.

“Our financial position gives us the flexibility to focus on continued reopenings and commercial initiatives. Over 85% of our shops are open, representing more than 90% of the 2019 sales potential. We have signed important new and renewed contracts, for example, in attractive touristic destinations like Bali, Dominican Republic, California (US), Mexico and Bulgaria, among others.”

Turning to the Ukraine war, Díaz said: “It is personally important to me to confirm our commitment to our employees in the Ukraine, who are very much in our thoughts. We are supporting all our Ukrainian employees and their families during these extremely difficult times – as is always the case with all our colleagues worldwide. We have offered all employees and their families relocation to other Dufry locations worldwide, and they have received all possible support by the local teams, including financially, legally, administratively but especially also on a personal level with the whole Dufry family being fully committed to help. We will continue to closely analyze the situation and react accordingly.”

Díaz, who has helmed Dufry since 2004, also touched on the appointment of Xavier Rossinyol as CEO, effective 1 June: “During recent weeks, Dufry’s Designated CEO Xavier Rossinyol and myself worked closely together to allow for a well-organized transition. I would like to express my gratitude to all of you, our stakeholders, and particularly to the Board of Directors and all colleagues at Dufry for the support I have received during the past 18 years. I am immensely grateful for the opportunity I had to lead and contribute to the development of this great company, and I am firmly convinced about Dufry’s prosperous future.”

During the results presentation on May 19, Díaz spoke of Dufry’s customer research, which has revealed demand for “sustainable products, products that foster wellbeing, and exclusive, premium and trendy products”.

The company has started to introduce new products and new shop concepts which have resulted in a positive response from customers, he added.

Xavier Rossinyol, who takes over from Díaz on 1 June, told analysts at the presentation that he was “very happy” to be back at Dufry, where he was part of the management team from 2004 until 2015.

He announced that the company had launched a full strategic review, to “ensure that the team’s energy goes on the same strategic vision”.

The new plan, which will be unveiled in early September 2022, will be based on three principles: first, the process will be “collaborative, participative, open and transparent”; second, data-driven; and third, offering 360-degree understanding of the company, spanning the management, shop floor/other employees, customers/passengers, airport landlords and suppliers.

Rossinyol said that the initial interviews and workshops had revealed that Dufry had “a very strong core business but we must reveal the company and keep the efficiencies in costs that we have achieved and reinvest to put the customer/passenger at the center of what we do”.

He acknowledged that this would mean “change in some areas”, in terms of investing in new skills in order to become “a really disruptive retailer in the future”.

Turnover for Q1 2022 reached CHF 1,118.6 million (US$1,145.6 million), representing organic growth of 144.5% compared to the previous year. Like-for-like sales contributed with 143.4% and net new concessions with 1.1%. The translational FX effect versus 2021 was -1.5%, mainly related to the devaluation of the EUR and the GBP versus CHF, which was not fully compensated by the USD to CHF appreciation.

Airports gained share in the channel mix and significantly improved the performance during Q1 2022 due to resuming of domestic, intra-regional as well as transatlantic travel.

Nearly all regions contributed positively as of March in line with the improving health situation and especially the increasing easing of travel protocols. Best performing were Mediterranean countries including Turkey, Greece and the Middle East, but the UK, France, Spain, Eastern Europe and Africa made significant progress, benefiting from leisure demand.

Dufry reported that the difficult geopolitical situation had impacted the company’s local Russian and Ukrainian operations, “with limited spillover to the broader region so far”.

Asia Pacific: Turnover fell to CHF 22.1 million (US$22.6 million) in Q1 2022, versus CHF 24.3 million (US$24.9 million) in the same period in 2021. Organic growth declined by -7.9% compared to 2021 as restrictions were tightened around the Olympic Winter Games in China in February and an increase in Covid cases since the beginning of the year.

While selected countries like Australia, Bali and Cambodia have started reopening, other governments still adhere to a zero-Covid approach or restrictive measures. As soon as restrictions are lifted, demand is expected to show a fast rebound as experienced throughout other geographies globally.

Best performing in the region were China and Macau due to domestic travel activity, with temporary interruptions whenever cases occur.

The region has seen a rapid rebound since February. This refers especially to US domestic, intra-regional and increasingly transatlantic travel, as well as tourist travel to Mexico, Central America and the Caribbean destinations, including the Dominican Republic and the Caribbean islands. South America also started to trend upwards, especially in Argentina, Colombia and Ecuador. 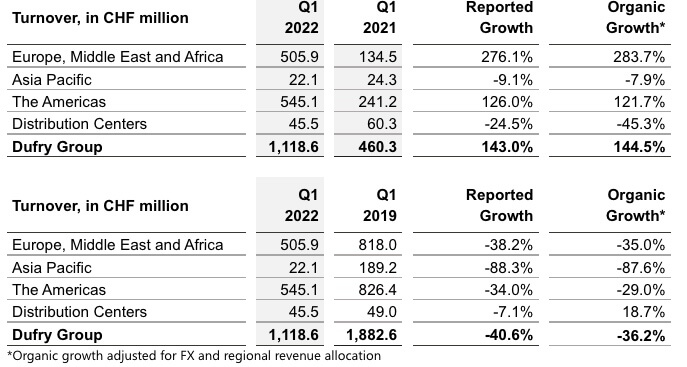 The regional net sales split mirrors the current travel patterns and saw Europe, Middle East and Africa contributing with 46.1%, Asia Pacific with 2.0% and the Americas with 49.5%.

Global distribution centers accounted for 2.4% of Q1 2022 net sales, reaching a more normalized level as Hainan is now being supplied by the local joint venture in China.

Another important tourist destination was the renewal of the duty free concession at Gusti Ngurah Rai International Airport in Bali for six years.

Furthermore, Dufry secured a five-year extension of its duty free and duty paid concession at Helsinki Airport, Finland, and a 10-year extension at Ontario International Airport (California, US), which serves more than 5.5 million travelers annually.

Also in the US, Dufry announced a partnership with Starbucks to operate and develop stores in US airports, with the first stores planned to open at New York LaGuardia Airport at the beginning of summer.

The current pipeline of opportunities stands at approximately 43,000 square meters as of the end of March 2022, Dufry noted.