By Wendy Morley in Dubai

If anyone had questioned whether the travel retal industry would show up for the MEADFA Conference this year, their question was answered in the affirmative as 460 delegates took part at the event, held at the Jumeirah Creekside Hotel in Dubai, with another 100 joining online.


Overall, the feeling was extremely positive and hopeful, and a few themes came up again and again:

1. Our industry needs to focus on a) collaboration and b) flexibility. We made it through the past 20 months because of these two things, and with them we are unstoppable.

2. Sustainability. Never before has this subject resonated so strongly with both the world at large and certainly the decision makers in our industry.

3. The need to invest in training and retaining the right people. 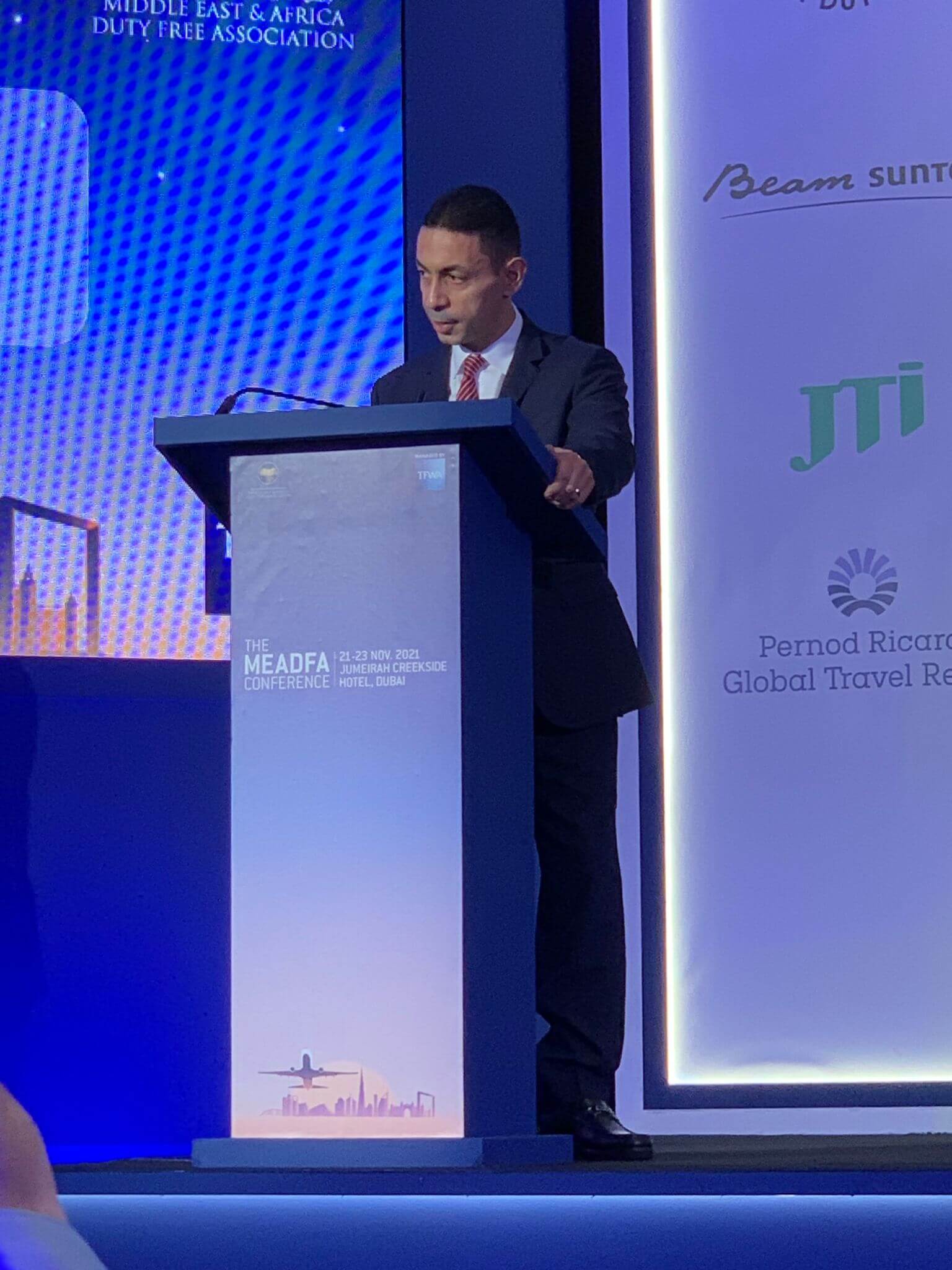 The day began with MEADFA President Sherif Toulan (pictured above) expressing the importance of support for and from all stakeholders in the preparations for welcoming back passengers. The need for the association to invest in advocacy is the overriding message from Toulan, and once again he stated that the African continent is a priority. Unfortunately the vaccination rate remains very low throughout Africa, and he reminded us that this threatens the industry at large. 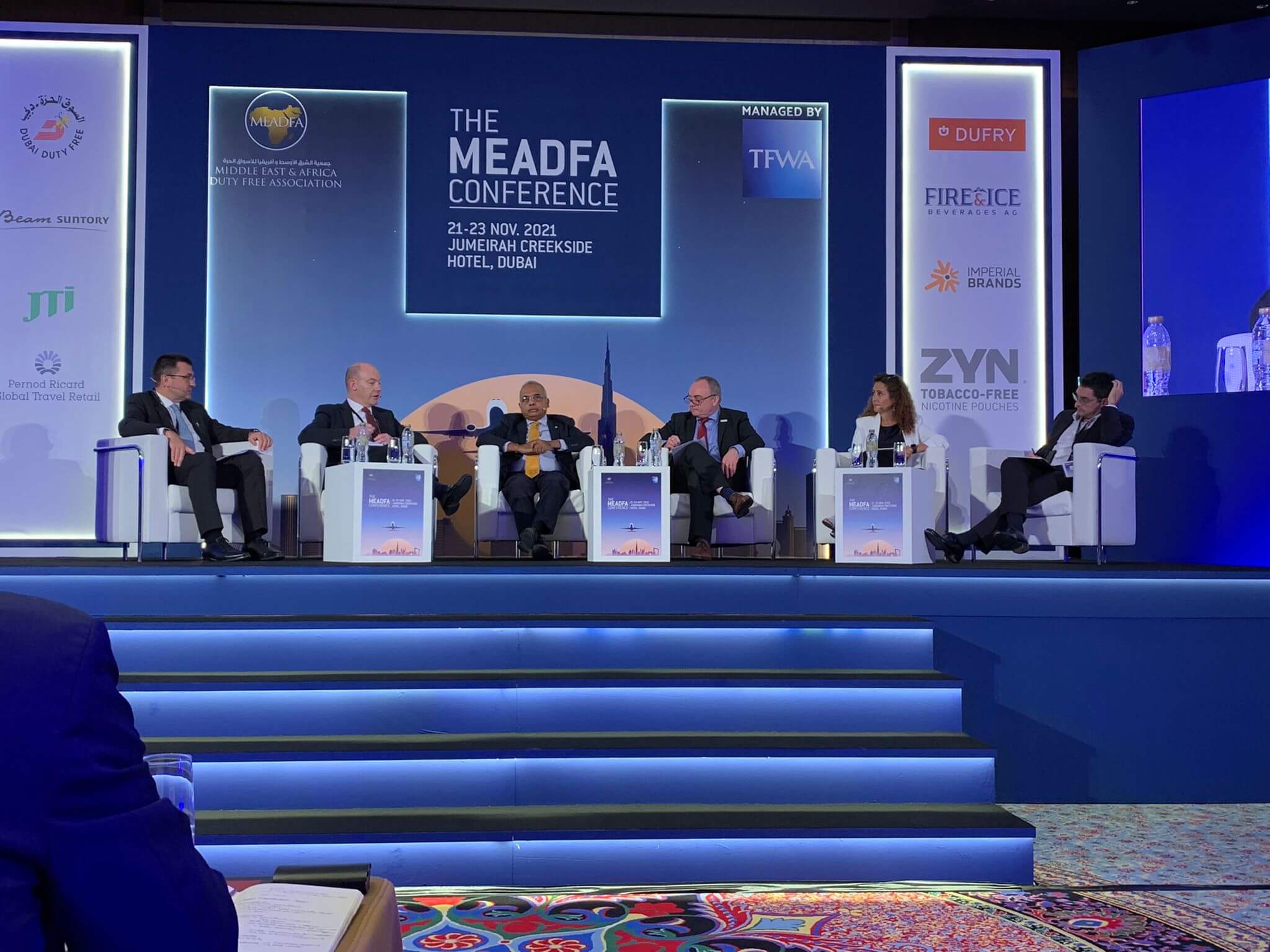 While Dubai Duty Free Vice Chairman and CEO Colm McLoughlin was sorely missed at MEADFA this year, COO Ramesh Cidambi did an admirable job filling in for the opening session. He spoke quite candidly about how business has gone, and at least one other retailer expressed how grateful he was to hear of the challenges of the past year, and to find that his experience was quite similar. While Cidambi stated that he is a “professional worrier” even he has become less cautious, to the point that he feels comfortable rehiring staff, especially in preparation for the reopening of Concourse A.

Cidambi candidly discussed the industry support that was necessary to get through these times. He stated that there was a varying range of support from suppliers, and he felt that everyone should ask themselves how they offered support. Could they have done better?

The panel of operators discussed what they are currently facing in the airport marketplace. Queues are increasing, dwell time is dwindling. The supply chain is challenging, as is the labour market. While travel volume is increasing, that brings its own challenges. As Chevalier stated, if traffic increases sharply, that presents challenges, whereas if it is more of a roller coaster, that also presents challenges. Currently it looks more like a sharp upturn, but with Europe’s cases on the rise and Austria choosing another lockdown, it’s a guessing game what will come next. And this is where the two themes of flexibility and collaboration become relevant, as industry stakeholders must present a fortified unit.

For Bourienne of Abu Dhabi airport, flexibility is also the keyword, in this case to work on a business model for the retailer and landlord.

Zarza stated the three focuses for Dufry, which could almost be stated across the operator board. 1) Flexibility, in regards to airports, employees and brands. 2) Investment in people — this was also a common refrain throughout the event. 3) Invest in technology, new ideas and new concepts.

Representatives from both IATA and ACI Africa spoke about the almost unbelievable catastrophe that awaited them both in March 2020. While traditionally airports and airlines might butt heads, there have been some improvements during this time.

Kamil Al Awadhi, who ran Kuwait Airways until recently, becoming the IATA Regional Vice President Africa, admitted that walking in he really did not understand the importance of duty free for the health of airports and for keeping prices down for travelers.

Both of these executives from these organizations stressed the importance of working together. Though sometimes these two organizations can butt heads, having worked together in the past year they have seen the benefits resulting.

Gordon Clark, VP Business Development TR for ForwardKeys discussed certain trends, such as the reduction or elimination of quarantines, the trend of booking longer times of travel, and the trend of splurging on more premium seats. 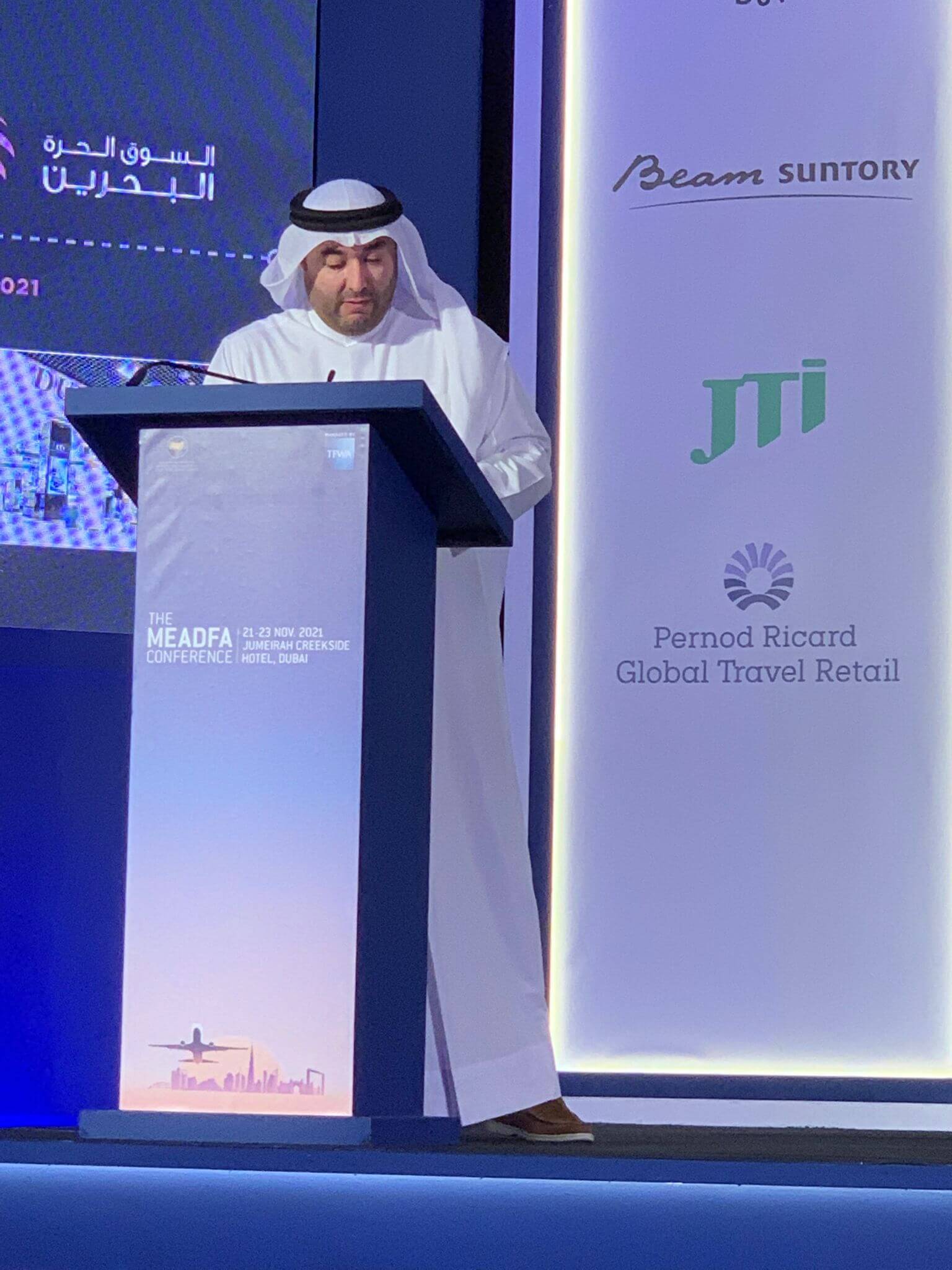 Bassam Al Wardi of Bahrain Duty Free (pictured above) showed the audience an inspiring collection of new shops at the airport, with an atmosphere that truly wows those who enter while inspiring them to shop, especially for luxury goods. The company’s team, managed by Aer Rianta International, was truly dedicated to helping streamline the processes using technology, which has been adopted. The company also opened a new walk-in humidor, and it offers luxurious privacy for those who like to shop in a more private environment. Both echoing and foreshadowing what others have said, Al Wardi stated that the most important investment was that of people.

Much of Day 2 was dedicated to Africa, as Toulan had promised. Perhaps most insightful was Africa Tourism Association CEO Naledi Khabo, who provided a truly insightful and thought-provoking session, bringing up many important points those who do not travel to the region might never think of, such as how it’s difficult to bring up the regional tourist industry when it is so difficult to travel from one part of the continent to another.

Other guest speakers discussing this region were Secretary General Abderahmane Berthe, who would really like to get the vaccine rate up throughout the continent, and Chief Executive Officer of Abidjan International Airport (AERIA) Aka Manouan. Joining this group was Dufry General Manager Africa Isaias Diaz.

Overwhelmingly, these two days brought about a feeling that Africa would be the next big story in travel retail. Manouan discussed the growth of his airport, and on Day 1 Dufry’s Zarza emphatically stated that the region was a shiny positive location, and this perspective was echoed throughout.

Delta's Regional Director Manoj Kuriakose offered a fascinating glimpse into the daily trials and decisions of a major airline during this time — with a cash burn of US$100 million per day at the beginning — and how the airline pulled itself out of that rapidly deepening hole. We will visit this perspective at a later date. 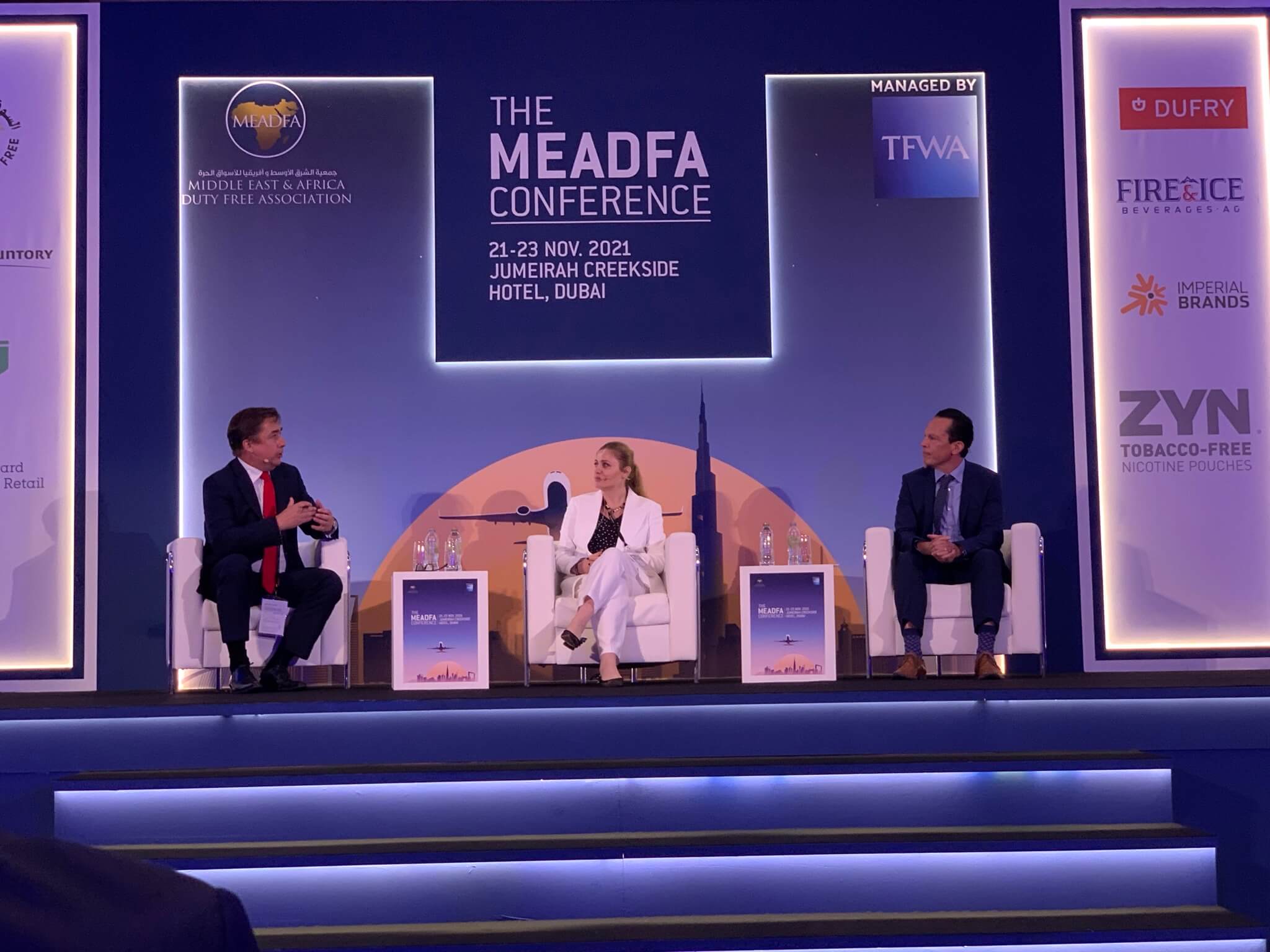 While the industry has had an incredible amount of challenges over the past year, the familiar challenges remain. Just before the final speakers took the stage, a panel including John Hume of Hume Brophy, chair of the MEADFA Advocacy Working Group, JTI's Rita Chidiac and ETRC Senior Counsel Ricardo Oliveira (pictured above) discussed the ever-ongoing fight against unfair regulations. (Unfortunately, COMESA Business Council CEO Sandra Uwera was unable to join this time.)

And finally, the discussion titled “Futureproofing Retail” focused almost exclusively on sustainability. Dr. Jennifer Cords of Gebr. Heinemann (pictured below) got the crowd truly excited to do the hiring necessary to put their respective companies’ money where it would do the most good. “Hire the hippies” might be the saying of the event. And Richard Gray, CEO of ARI ME, all but echoed her charge in his talk.

If this MEADFA conference is the shape of things to come, then the future is bright, green, sustainable and collaborative. And may it all be so.