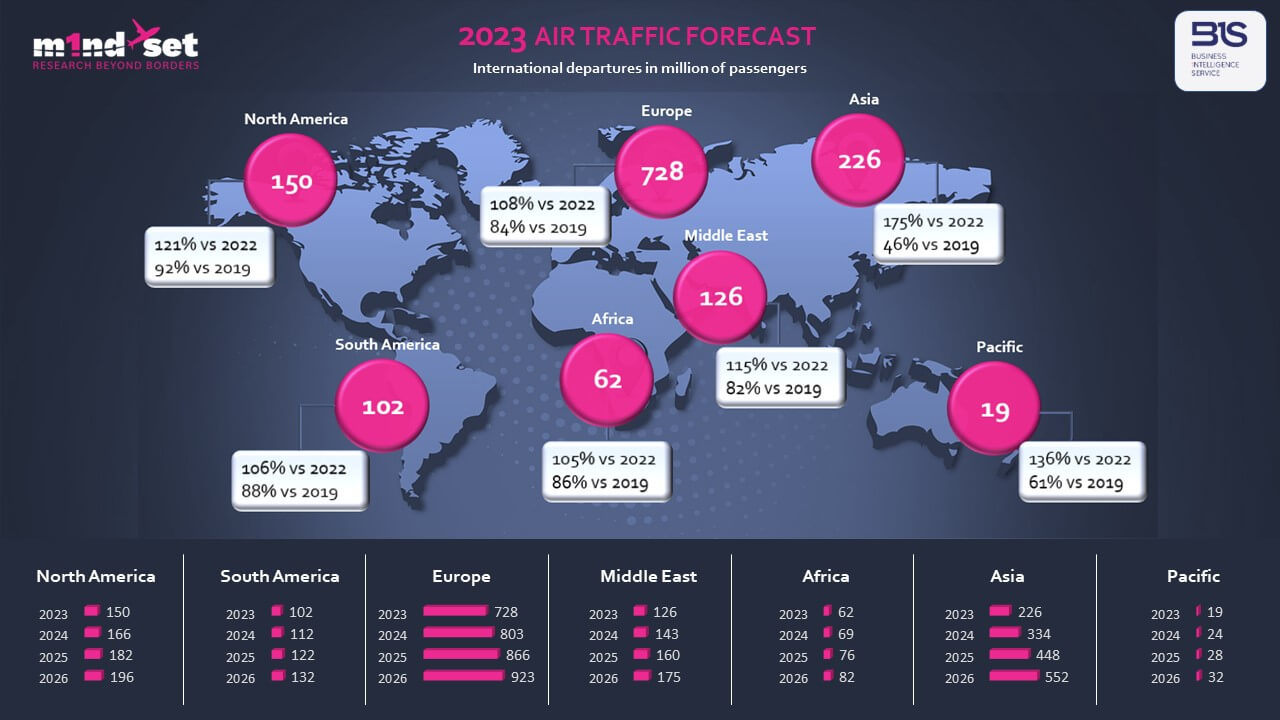 m1nd-set has released its air traffic forecast for 2023 which includes a four-year forecast up until 2026. Asia and the Pacific will see the largest year percentage gains in air traffic in 2023, according to the Swiss research agency.

The m1nd-set traffic forecast is compiled via the agency’s data tool, B1S, in partnership with IATA and their air traffic data partner ARC, which comprises the world’s most comprehensive traffic and traffic forecast database.

m1nd-set reports Asia will see a 75% increase in traffic this year vs. 2022, reaching 226 million passengers, an increase which represents only 46% of the pre-pandemic traffic levels in 2019. The Pacific region will see the second largest year-on-year traffic increase, reaching 19 million passengers this year, which represents 61% of 2019 levels. This is up 36% compared to 2022. It’s expected that traffic across Asia Pacific will reach pre-pandemic levels by 2026.

“The B1S traffic forecasts in partnership with IATA and DDS are the most accurate in the industry given that they consider airline flight and reservation data, including data direct and indirect sales data, from around 500 airlines, as well as GDS data from all relevant booking platforms. Most other traffic forecasts only use the GDS data which represents less than half the overall data. The B1S IATA data also considers other external factors such as macro-economic and geopolitical events that can impact international travel.

“When combining this accurate traffic data with our own shopper insights, compiled from hundreds of airports across the globe, we can provide our industry partners with the most realistic projection of shopper behavior by region, market and even airport for the next two to three years. This also incorporates what shoppers are saying about how they will change behavior in the future, based on changing priorities and concerns” says Dr. Peter Mohn, Owner & CEO at m1nd-set.

The return of the Chinese traveler: SH 2023

Referring to the return of the Chinese traveler segment, Mohn explains that it will take place gradually.

“We realize that the industry is eagerly awaiting the return of Chinese travelers but we need to be realistic about this. At m1nd-set we project that the Chinese will not be traveling in large numbers until the second half of the year. This is due to several factors. Firstly, many passports have expired and will take quite some time to get the renewals processed, due to high demand. Secondly, there will be inevitable delays in visa processing given the reduced staff numbers in foreign consulates.

“Also, following the ban of group tour package sales in China early in the pandemic, initially we will see only independent and already experienced travelers returning. Another reason the return of the Chinese will not be an overnight occurrence is that all the leading airlines will need time to resume the flights. Price will also be a barrier to a sudden spike in numbers; flying has become less affordable for many Chinese as prices have increased significantly compared to before the pandemic,” he concludes.