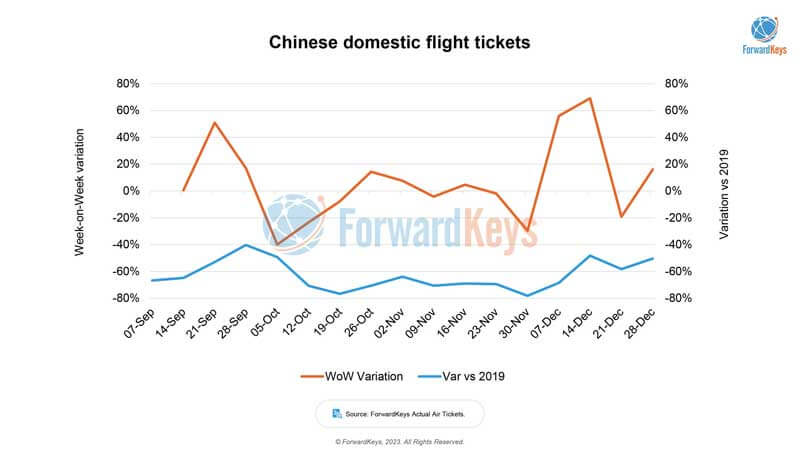 China’s decision to implement a zero-COVID policy has triggered a surge in flight bookings, according to the latest data from ForwardKeys.

On December 7, Chinese authorities announced that a negative PCR test would no longer be required for air travel between provinces. Domestic flight bookings immediately surged 56% on the previous week and continued to increase 69% the following week.

On December 26, China removed all COVID-related restrictions on domestic air travel; and bookings surged again, reaching 50% of 2019’s level in the final week of the year. 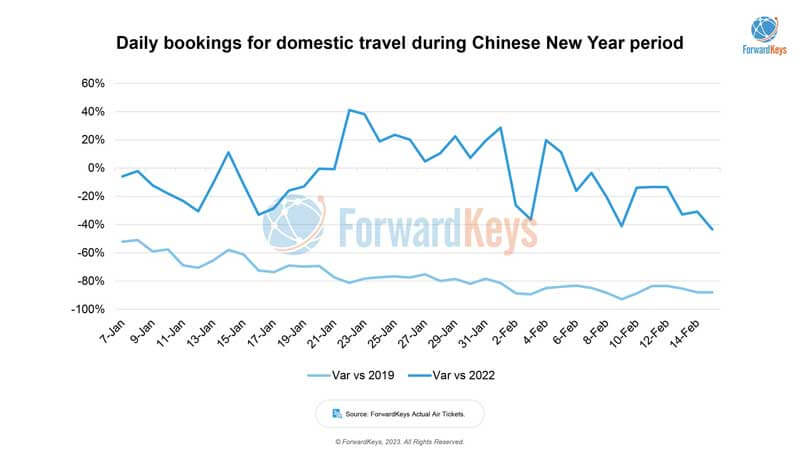 As of January 3, domestic flight bookings during the upcoming Chinese New Year period (January 7 – February 15), were down 71% compared to pre-pandemic (2019) levels and down 8% vs. last year, with the most popular destinations being Beijing, Shanghai, Chengdu, Kunming, Sanya, Shenzhen, Haikou, Guangzhou and Chongqing. Before the December announcement, domestic flight bookings were down 91% compared to 2019.

China’s aviation regulator plans to restore flight capacity to 70% of pre-pandemic levels by January 6, and to 88% by the end of the month. However, a full recovery will take time, as the industry needs to re-hire staff and meet all flight safety and service requirements.

Also announced on December 26, and taking effect on January 8, were the end of the cap on the number of international flights to China and quarantine measures. Additionally, Chinese citizens can now renew expired passports and apply for new ones. 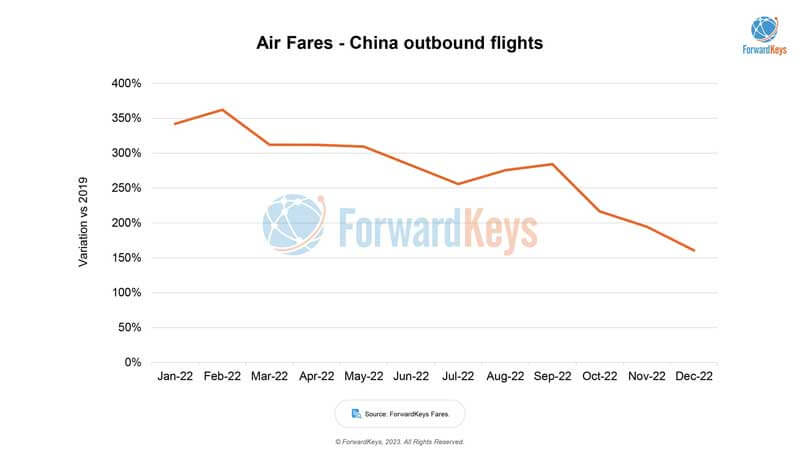 Outbound flight bookings between December 26 and January 3 increased 192% compared to the same period last year; however, they are still down 85% vs. pre-pandemic levels. Currently, the most popular return trips are to Macau, Hong Kong, Tokyo, Seoul, Taipei, Singapore, Bangkok, Dubai, Abu Dhabi and Frankfurt.

Important to note, bookings to Abu Dhabi which has traditionally been a major gateway between China and the West, are down 51% vs. 2019. More than half (67%) of bookings made between December 26 and January 3 were in connection to traveling during the Chinese New Year period.

“Although Chinese New Year is likely to see international travel rebound for the first time in three years, we will need to wait longer before we see a resurgence in Chinese tourists exploring the globe. The reasons are: first, current scheduled international flight capacity is only at 10% of 2019’s level; and owing to approval requirements for traffic rights and airport slots, it will be difficult for airlines to gear back up in less than a few months.

"Second, ticket prices remain high, with average air fares in December 160% higher than in 2019. That said, there has been a downward trend since June, when quarantine was reduced from three weeks to seven days, and then to five days in November.

“Third, some destinations, including the US, the UK, India, Qatar, Canada, Australia and all 27 EU member countries now require a pre-flight COVID-19 test for Chinese visitors; and others, such as Japan, South Korea and Italy, will impose testing on arrival and quarantine for those who test positive.

"Finally, a bottleneck processing passport renewals and visa applications is likely; and some countries, such as South Korea and Japan, are restricting short-term visas for Chinese travellers until the end of this month. Right now, we expect the Chinese outbound market will pick up strongly in Q2 2023, when airlines schedule capacity for the spring and summer, which include the May holiday, Dragon Boat festival in June and summer holidays," says Olivier Ponti, VP Insights at ForwardKeys.