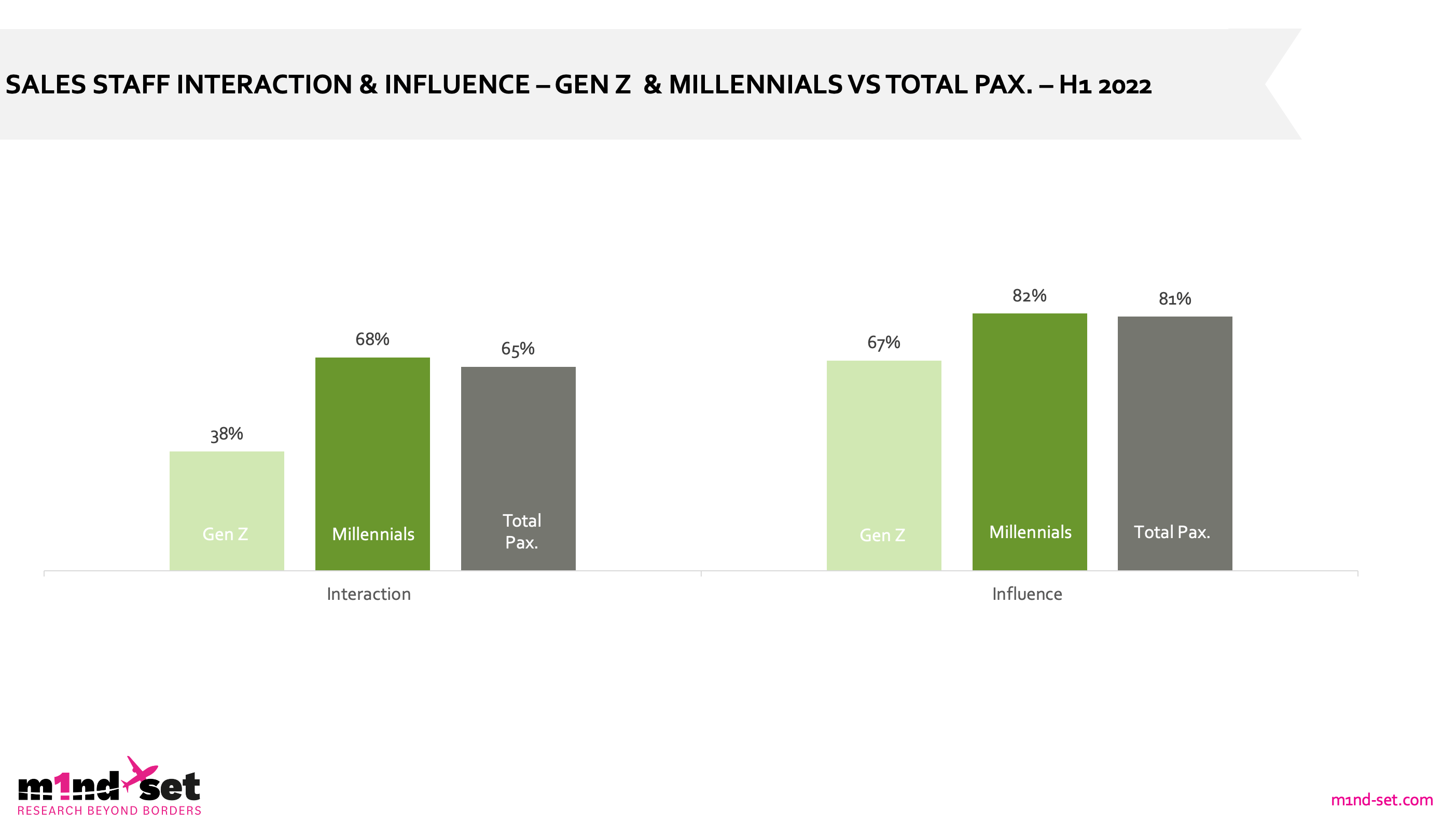 Following a two-month study of behavioral differences among Gen Z and millennial shoppers, m1nd-set reports that the two age groups are unique when it comes to interacting with sales associates, considering touchpoints and spending money.

Gen Z shoppers tend to approach sales associates in duty free shops considerably less than millennial shoppers. Only 38% of Gen Zs say they engage with associates, 30% lower than millennials (68% of who interact with sales staff).

The research, which also compares the shopper behavior with the average across all age groups, reveals that the tendency to engage with sales staff is above average among millennials. According to m1nd-set, 65% of travelers from all age groups interact with associates. 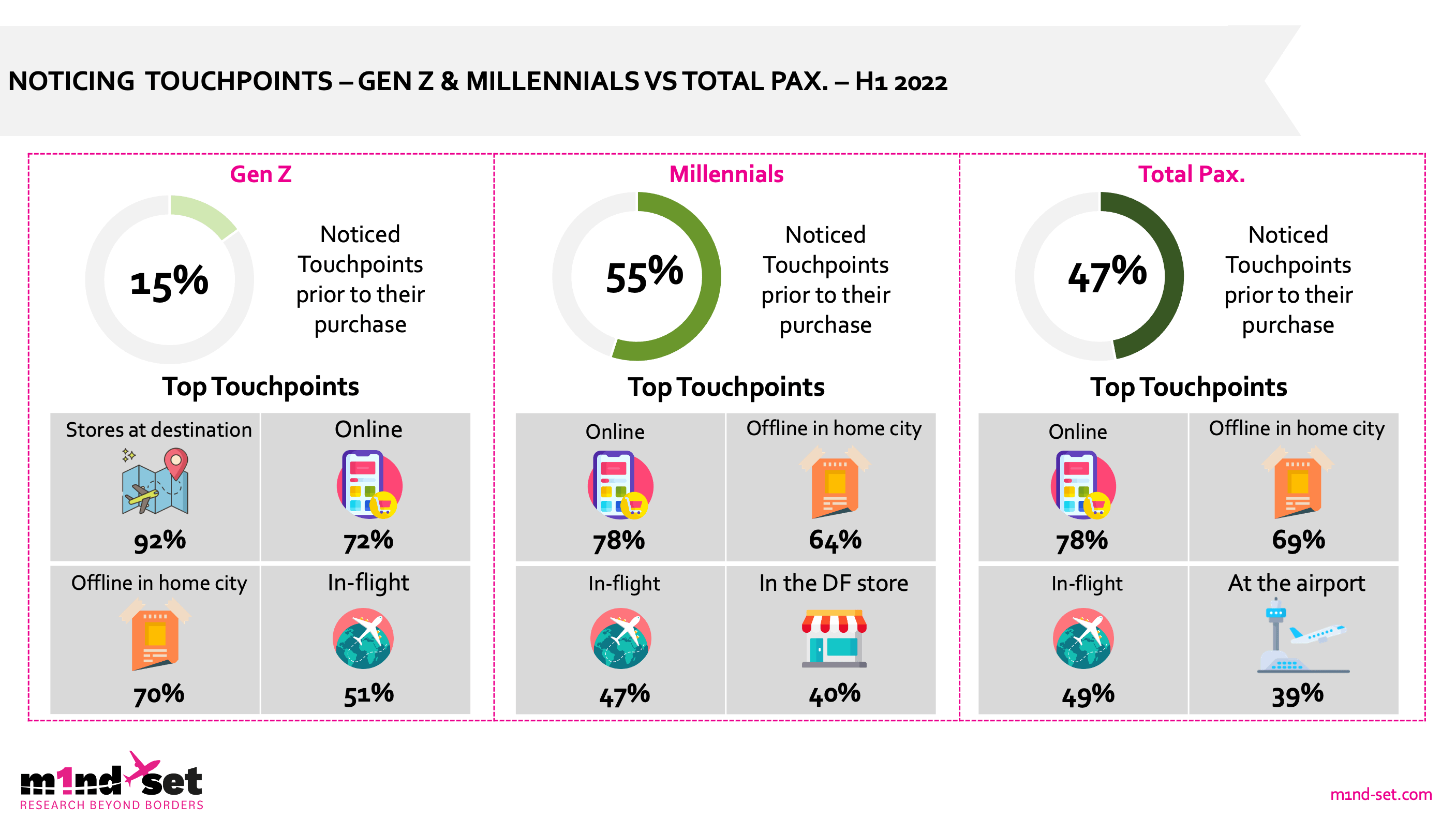 Another significant difference in shopper behavior can be seen in how Gen Zs and millennials react to communications touchpoints. More than half of millennials (55%) notice touchpoints prior to purchase when shopping duty free, above the total for all passengers (47%).

In contrast, only 15% of the younger age group report that they notice touchpoints pre-purchase. This indicates the generational behavior differences in general regarding how and where the two segments source and digest their information.

“It is extremely important for travel retail marketers marketing to millennials and Gen Z traveling consumers to understand where to reach their target audiences when they are not traveling. For both these age segments, it’s clearly online where they can be found, but among Gen Zs it’s most commonly on the mobile and via certain social media services.

“Platforms such as TikTok have to be integral to the marketing mix for marketers who are intent on reaching Gen Z shoppers, while millennials are more prone to be across multiple platforms such as Facebook, Instagram and Twitter,” explains Peter Mohn, Owner & Chief Executive at m1nd-set. 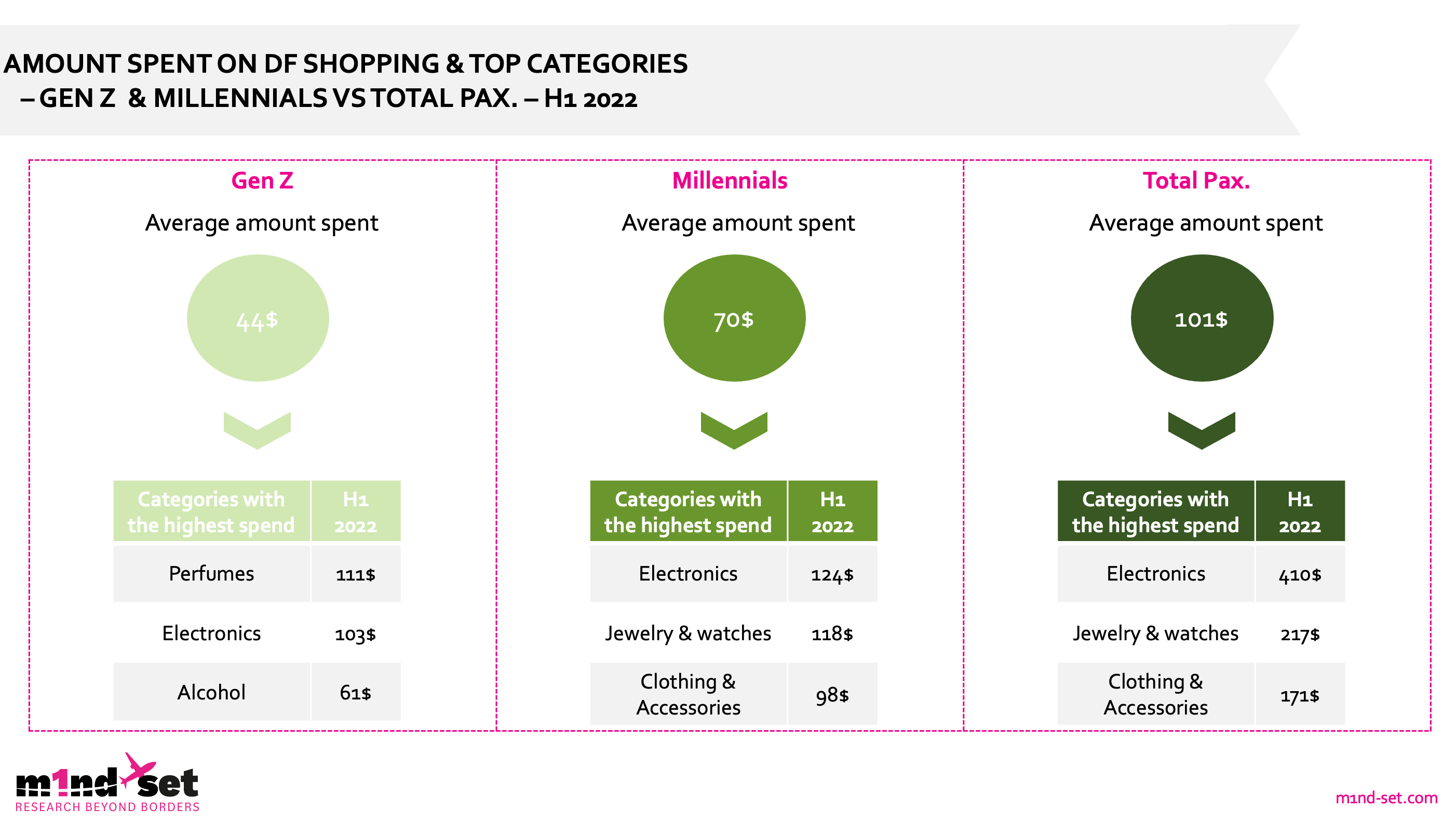 Average spend is another area where m1nd-set reports differences between millennials and Gen Zs in travel retail. Spend among both age segments is significantly lower than the average among all age groups, which is US$101. When it comes to millennials, average spend is $70, with the highest spend allocated to the Electronics category at $124, followed by Jewellery & Watches at $118 and Fashion & Accessories at $98. Average spend in travel retail among Gen Z shoppers is considerably lower at $44, with the highest spend being allocated to Perfumes with $111, Electronics, $103 and Alcohol, $61.

Overall spend among both age groups is worth noting. Whether in domestic or travel retail, millennials represent a higher proportion of the overall consumer spend. Both generations combined currently represent just over 30% of total retail spend, but this share is set to increase to 48% by the end of the decade. In travel retail, the spend is currently 6% among Gen Z consumers and 25% among millennials. According to m1nd-set, the millennials’ share of spend in travel retail will increase by only a few percentage points by the end of the decade, while the growth in spend by 2030 among Gen Zs consumers is expected to be more than threefold.

“Although a sizeable proportion of the Gen Z consumer generation is still below 18 and whose purchasing power barely surpasses their parents’ allowance, the potential among this generation – both as future customers and disruptors – is not to be underestimated.

“Both millennials and Gen Zs have a strong tendency to favor sustainable practices when shopping in travel retail. While they are keen on championing brands with a strong social and environmental impact and story, they are equally intent on shouting out on social media about less virtuous brands and will be quick to name shame companies and brands, which do not demonstrate ethical and environmentally friendly practices. This is particularly true among Gen Zs,” adds Mohn.