ForwardKeys has issued a report stating that international flights to European destinations in July and August approached 40% of 2019 levels, at 39.9%.

While this total is significantly better than last year’s 26.6%, the number does not reflect the whole picture, which shows that there is clear discrepancy between destinations.

Greece has been the clear standout, achieving 86% of July and August arrivals in 2021 that it did in 2019, helped no doubt by its early announcement that it would accept visitors who had been fully vaccinated and/or could show a negative PCR test and/or could show proof of recovering from COVID-19. Following Greece were Cyprus, at 64.5% compared to 2019, Turkey at 62.0% and Iceland at 61.8%. 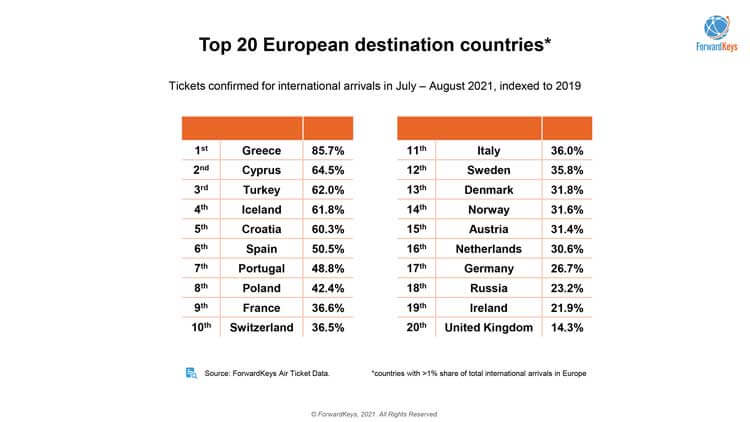 Countries that rely more on long haul tourism, such as Italy and France, and those that imposed more onerous and volatile travel restrictions, such as the UK, fared the worst. The UK achieved only 14.3% of 2019’s travelers.

Intra-European travel made up 71.4% of arrivals, excluding low-cost carriers. In 2019 this figure was 57.1%. Beach resort destinations fared the best whereas long-haul visitors were virtually non-existent. 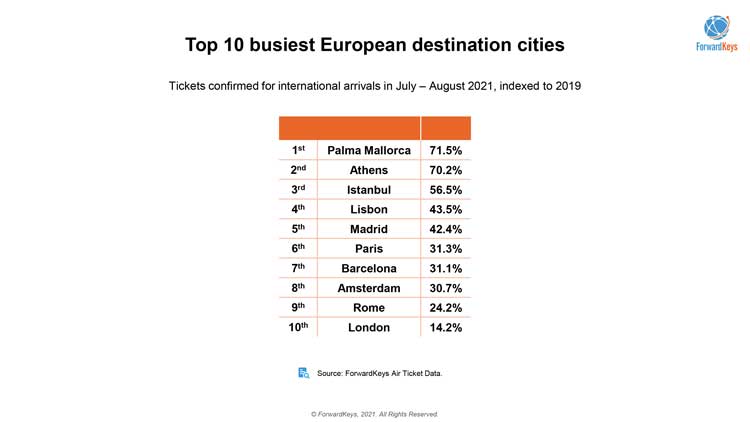 Traditional seaside holiday hotspots dominated summer European travel destinations. Leading were Heraklion and Antalya, actually exceeding pre-pandemic levels by 5.8% and 0.5% respectively, followed by Thessaloniki, at 98.3% of 2019’s visitors; Ibiza at 91.8%; Larnaca at 73.7% and Palma Mallorca at 72.5%. Athens, which is a gateway to numerous islands in the Adriatic, at 70.2%. 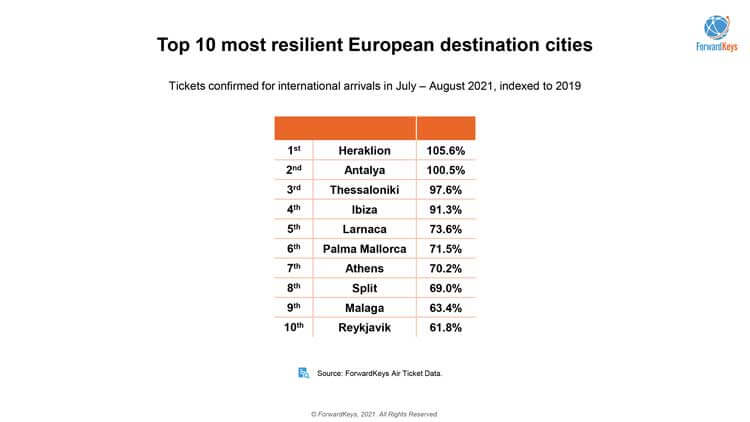 Some destinations fared relatively better or worse for reasons such as travel regulations. For example, Portugal suffered when the UK changed its designation from green to amber in June; and Spain suffered at the end of July when Germany warned against all but essential travel.

Unfortunately, the outlook is not improving, as bookings slowed towards the end of the summer period.

Olivier Ponti, VP Insights, ForwardKeys commented: “When one considers how dreadful things were for tourism in Europe last year, this summer has been a very modest recovery story. Benchmarked against normal times, the continued low intensity of international air travel, less than 40% of normal, has been extremely damaging for the aviation industry. The continued absence of long-haul travellers, particularly from the Far East (it reached just 2.5% of pre-pandemic volumes this summer) will prove a severe blow to the visitor economy of several European countries.”

He concluded: “If there is an element of consolation, it is people ‘staycationing,’ ie: taking a holiday in their own country. While the domestic aviation has a minority share of the market in Europe in normal times, it has held up much better during the pandemic because it has not been subject to such challenging travel restrictions. For example, the Canaries and the Balearics welcomed more Spanish visitors than they do in a normal season.”