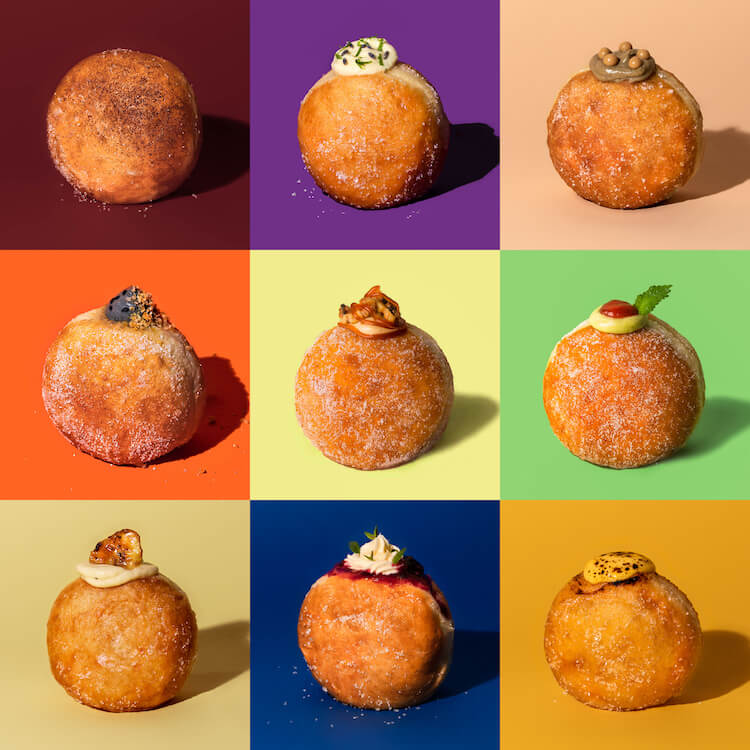 Sourbombe has a number of new flavors available at Jewel

Sourbombe is set to open its second outlet in Jewel in August 2022. It is a mashup of sourdough and Italian Bomboloni (“bomb” shaped doughnuts stuffed with pastry cream) with an artisanal twist. Run by Genevieve Lee, runner-up of the first season of MasterChef Singapore, “Sourbombe experiments and pushes the boundaries of traditional Bomboloni to create the ultimate treat,” reads the press release.

“Being Singapore’s first artisanal sourdough bomboloni, we made the conscious decision to expand our bakery in Jewel Changi Airport as we wanted to fly our Singapore flag high and proud by sharing our whimsical and imaginary flavours to more pastry lovers, especially tourists,” said Genevieve Lee, co-founder of Sourbombe, adding that the flavors are inspired by surroundings, ingredients or people they meet.

“Opening in Jewel will be such an incredible opportunity for us to expand our horizons to more creative bakes and to also launch our very first dine-in dessert experience. The team and I are excited to continue sharing our craft with tourists and locals alike,” said Lee.

The Hainan Story Chapter 2, opening in early July, will serve up favorites such as Newspaper Curry Rice, Wee Nam Kee Chicken Rice and Uncle Robert Western & BBQ. Reminisce the taste of yesteryear with its traditional dishes or try those with a modern twist. Its bakery also offers freshly baked goods such as its famed Swiss rolls and Ondeh Ondeh cookies, with cream horns and traditional cakes as new additions. Novel to the Jewel outlet are two new brands – 218 Hainanese Lor Mee and Ah Mai Kum Hainanese Chicken Rice Porridge. The Jewel store will be decked out in black and white colonial style with its interior splashed with the brand’s vibrant colours.

The Original Vadai, set to open at end of June, has its roots in Geylang Serai’s Ramadan Bazaar from more than 30 years ago. Other than its popular prawn vadai, other variations of the dough fritter snack include Ikan Billis, onion, cheese and chocolate.

Fong Sheng Hao will open at Jewel in September

Taiwan's very first charcoal grilled toast and milk tea outfit Fong Sheng Hao has expanded beyond its borders from its humble beginnings in a small alley near Shilin MRT station in Taipei. Its savory toasts such as Pork and Egg Cheese or flavourful Braised Pork Rice pairs well with its Signature Milk Tea anytime of the day. Fong Sheng Hao will open in Jewel on September 12.

Japanese food lovers will be delighted to know that three Japanese F&B eateries – Kei Kaisendon (July), SUKIYA (opened June 10), SUSHIRO (July) have or will be commencing operations. Kei Kaisendon specializes in rice bowls with fresh sashimi air-flown all the way from Japan and is known for concocting four unique ways of savoring its kaisendon. SUKIYA is Japan’s top Gyudon chain from Yokohama, and offers beef yakiniku, Japanese curry, and karaage on its menu.

Sushiro has an array of over more than types of sushi and Japanese dishes, served up on a conveyor belt. Two special items have been created to commemorate the opening of the Jewel outlet. The Captain Jumbo Fried Shrimp, served with tartar sauce on the side, is the chef’s creative spin on an airplane. Jewels from the Sea is an umami-packed morsel of fresh seafood, consisting of opulent ingredients like abalone, scallop, ikura (salmon roe), and matumaezuke (seasoned herring roe and kombu mix).

“With these new store openings, both local and foreign visitors are in for a treat and will be spoilt for choice with Jewel’s refreshed offerings. The tenant mix is curated with the objective of showcasing the best of Singapore to the world and to bring in the most popular global brands to Jewel,” said James Fong, CEO of Jewel Changi Airport Devt. “With international travel recovering, our footfall traffic has also rebounded to two-thirds of pre-COVID levels. We look forward to welcoming back travelers to experience Singapore’s local flavors as well as enjoy Jewel's play attractions and retail offerings.”