The US is now home to only three of the top 10 busiest airports in the world, with Chinese airports filling the other seven positions in 2020. 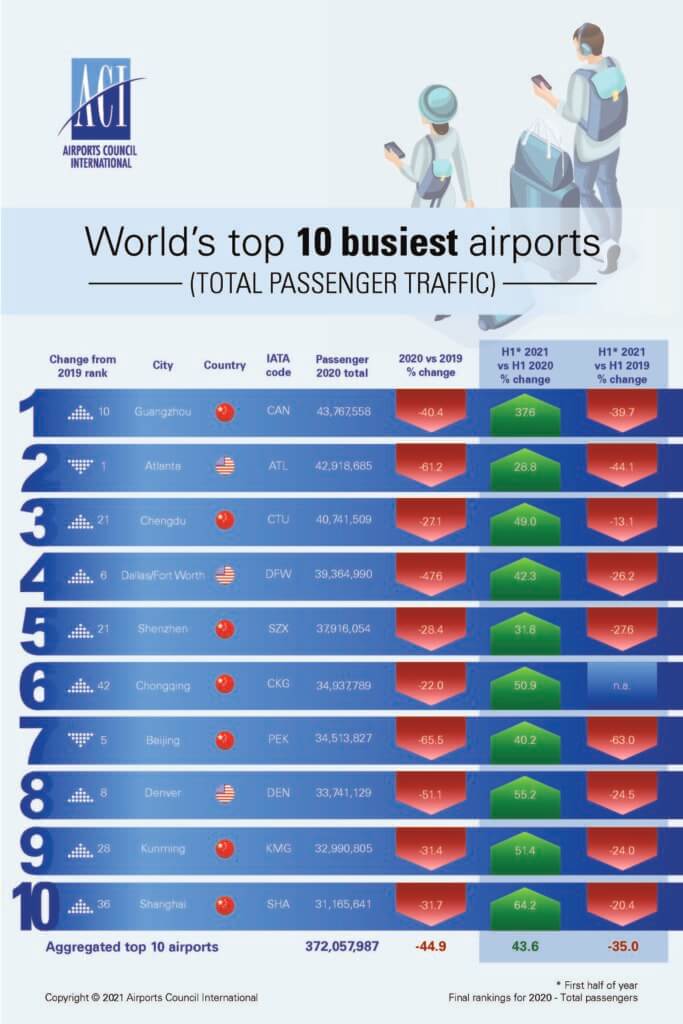 According to the report, the pandemic reduced the number of passengers at the world’s airports by more than 5.6 billion in 2020 and is forecast to remove an additional 4.6 billion passengers by the end of 2021, compared to 2019 volumes.

Global passenger traffic in 2021 is expected to reach only half of what it was in 2019, totaling only 4.6 billion of the 9.2 billion passengers served two years ago.

The world’s airports also saw a sharp reduction in global aircraft movements in 2020, decreasing by 39.5% to reach only 62 million.

Due to travel restrictions worldwide, domestic passenger traffic continues its trend from 2020 into 2021 of recovering faster than the international market, especially in China and in the US, the latter being the world’s largest domestic market.

Globally, domestic traffic will continue to increase in 2021 to reach more than 3.1 billion passengers by the end of the year, a level corresponding to 58.5% of that achieved in 2019.

The US is now home to only three of the top 10 busiest airports in the world, Chinese airports filling the seven other top positions in 2020.

Before the pandemic, four of the 10 busiest airports in Asia Pacific were Chinese airports. As a result of the Covid-19 outbreak and then the rapid recovery of its domestic passenger market, seven airports in China now reside in the top 10, six of them new to the list.

The Asia Pacific region has recently shown some signs of a slower-than-expected recovery. This is due to many countries remaining closed to international travel, impacting all regions.

“The impact of Covid-19 has completely altered the airport sector as seen in the busiest passenger and cargo traffic rankings,” ACI World Director General Luis Felipe de Oliveira said. “The 2021 World Airport Traffic Report provides in-depth analyses into the impact of the pandemic on airport passenger, movement and cargo traffic from a global and regional perspective, enabling airport stakeholders to make data-driven decisions as airports and the aviation sector work towards a sustained long-term recovery.

“The economic value driven by airports cannot be understated when it comes to facilitating business and leisure travel, trade and the subsequent GDP, jobs, taxes and associated social benefits. Air traffic is the lifeblood of the airport business, highlighting the necessity of government action to promote safe travel – including a coordinated and risk-based approach to testing and vaccination – rather than enforcing full-scale restrictions and blanket measures.”