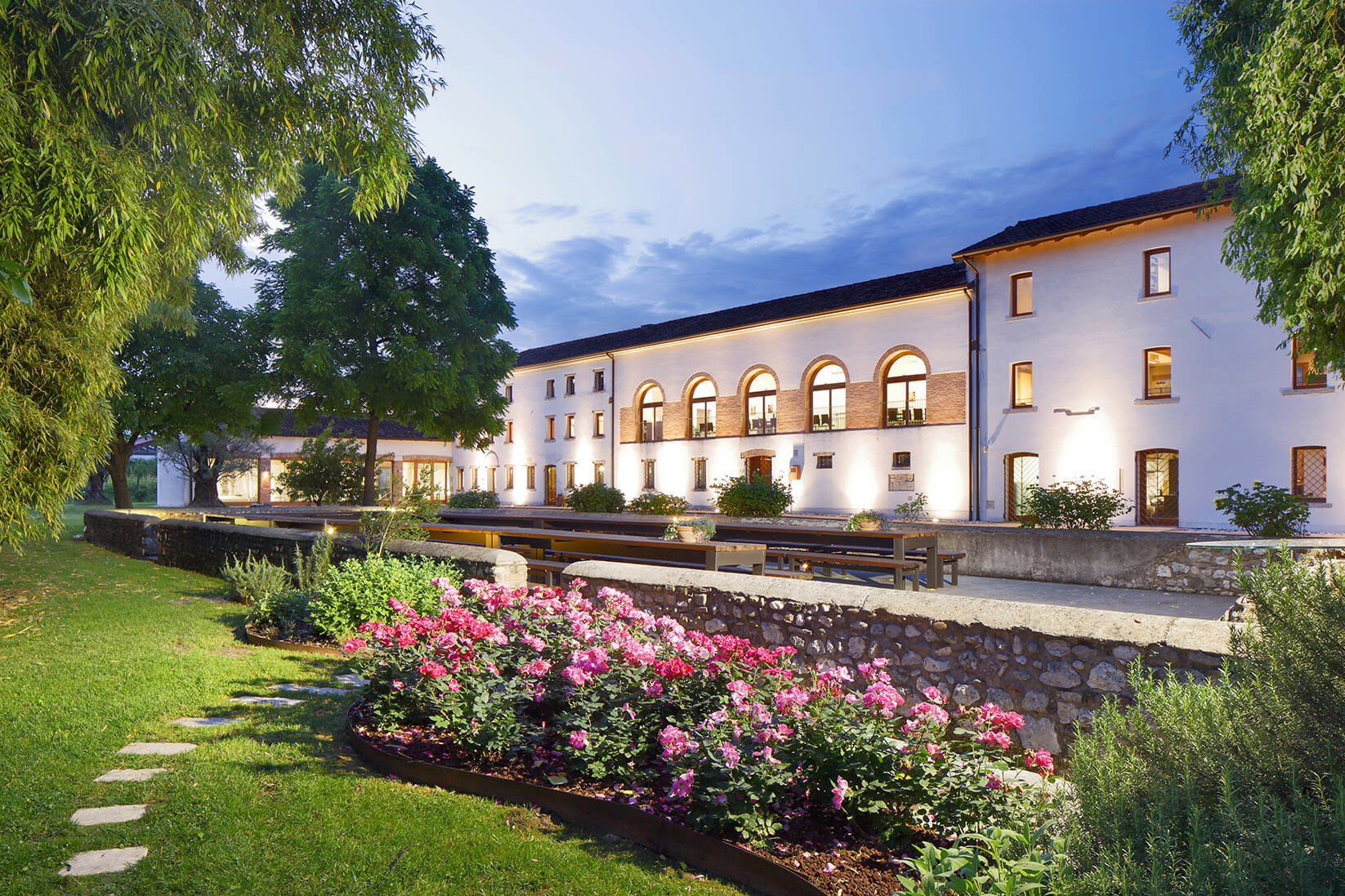 Bibano Villa Rosina; a snapshot of the company's headquarters

The Bottega company is celebrating 45 years since its foundation in 1977. The company has become one of Italy's top 20 private wineries and exports products to 150 countries worldwide.

The Bottega group is both a winery and a distillery, with a close-knit team of oenologists who are experts in both winemaking and distillation. The company is based in Bibano di Godega S.U., 50 kilometers north of Venice. Located in the Prosecco DOC area, it is at the center of an area where Cabernet, Chardonnay, Raboso, Picolit and other well-known grape varieties are successfully cultivated.

Distilleria Bottega was founded in 1977 by Aldo Bottega, a master distiller with more than thirty years of experience in the sector, and his wife Rosina Zambon. He inherited a passion for the vine, with roots all the way back to the 1600s.

At the end of the 1970s, the company was a small business, operating in the local grappa market. In 1983, when the founder died, his son Sandro, together with his siblings Barbara and Stefano, took over the company. Within a few years Distilleria Bottega emerged from anonymity, thanks to an innovative distillation system that makes grappa softer and more delicate.

In 1992, in a sign of diversification, Il Vino dei Poeti was produced, a sparkling Prosecco, which also opened up the wine market to the company. One year later, designer Monica Lisetto joined the company, "giving further impetus to the uniqueness of Bottega products," reads the press release. The collaboration with Stefania Sandrelli was consolidated and Chianti Acino d'Oro was born. The launch of Fragolino in 1995, a drink of great tradition, altered the balance in the beverage sector.

After ten years of research, the company opened a new distillery in Pianzano (TV) that combined triple distillation, vacuum and bain-marie, allowing the production of soft, richly aromatic distillates.

In the early 2000s, Bottega Gold was launched, the Prosecco Doc characterized by its golden livery bottle, which proved to be an icon of Italian taste and a great commercial success.

Between 2009 and 2011, the company expanded its wine production to Valpolicella and Montalcino. Almost a decade later, the "meticulous restoration" of a historic wine cellar in Valgatara was completed. The structure, purchased by the company three years earlier, is characterized by its architectural value and is surrounded by the denomination's vineyards.

At the end of 2019 in Montalcino, the Bottega company acquired a winery within the denomination. At the first one in Valgatara (VR), the famous Amarone and Ripasso are produced. At the second, in Montalcino (SI), Brunello, the prince of Italian wines, originates.

Previously in 2013, Distilleria Bottega Srl, was transformed into Bottega S.p.A.

Among its most important milestones is the birth of the Prosecco Bar project. Launched in 2014, it re-proposes the philosophy of the Venetian bacaro, combining dishes of Venetian and Italian cuisine with Bottega wines and spirits. Today, there are 32 locations around the world, inside airports, stations, cruise ships and hotels.