Maker’s Mark has announced its newest Wood Finishing Series – the City Series – which aims to capture the character of the world’s most enchanting locations for whisky fans traveling the globe.

Available exclusively to Global Travel Retail, the Wood Finishing City Series will launch with two new whisky offerings. The New York Edition and the Sydney Edition are the first two handcrafted Maker’s expressions of a series which will honor the unique taste profiles of cities around the world, while more cities will be added in the years to come.

“Maker’s Mark knows that to truly experience a city you must know its insiders,” reads the press release.

To kick off this series, Maker’s recruited aesthetes and tastemakers who became our city spirit guides. With every Maker’s Mark Wood Finishing City Series whisky, there’s an established taste vision and flavor goal in mind to ensure that the bourbon evokes the essence and nuances of the city they live and love.

The City Series is the result of more than a decade of wood-science innovation and expertise, exploring the influence of oak and agriculture on bourbon’s wide-ranging taste profiles. The Maker’s Mark Wood Finishing Series celebrates the inherent uniqueness of different wood types, celebrating individuality through flavour, just as each city’s unique, signature whisky now does. 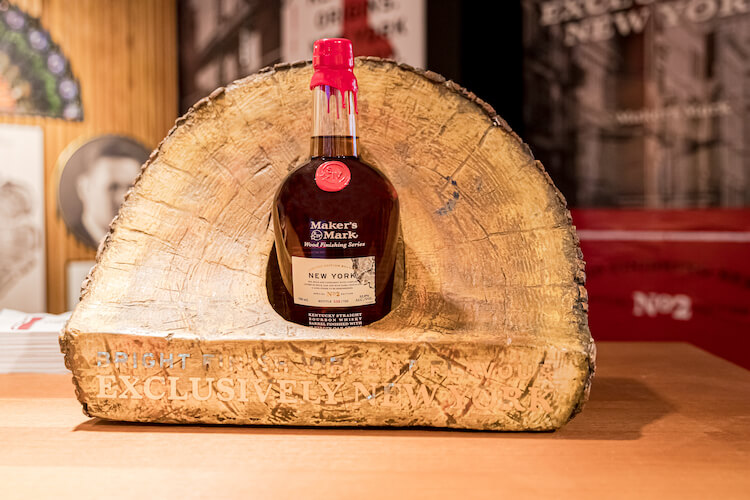 The taste vision for the New York Edition was created with the goal of capturing the excitement of experiencing a first trip to the city that never sleeps. Flavor experts Erina Yoshida and Justin Ottevanger created a whisky that is big, bold and complex, with layers of spice, oak and rich dark chocolate. At 107.8 proof, the limited-edition bourbon has a long finish… nearly as long as its namesake city’s iconic skyline.

The boutique store will feature a disruptive activation with various experiential components, such as screen-printing, as well as brand ambassadors to bring the handcrafted bourbon to life.

Scott Halpern, Co-CEO of International Shoppes, said, “International Shoppes is very proud that our JFK Terminal 1 property is home to this one-of-a-kind experience for the customers. The unit was quickly turned into a Makers Mark iconic location. As the terminal continues to rebound to pre-pandemic levels, this added terminal experience is reminding customers why NY is such a great place.” The Sydney Edition on display

With the help of Sydney insiders Sam Egerton and Jordan Toft, this herbaceous expression of Maker’s Mark pays homage to the city’s vibrant people, culture and dynamic palate. Meant to be enjoyed outdoors, the 107.3 proof spirit is ripe and fruit-forward.

The Maker’s Mark Wood Finishing Series Sydney Edition is available from Heinemann at Sydney Airport Terminal 1 for $140 AUD (US$93.80).

The immersive space will feature stunning designs which pay homage to Sydney, while also offering whisky fans a tasting experience from brand ambassadors.

Rob Samuels, Chief Distillery Officer at Maker’s Mark and Grandson of the Founders, said, “It’s incredibly rewarding to bring a taste of our distillery in Loretto, Kentucky to the Global Travel Retail market through the new City Series. Just as my grandparents sat down with a taste vision in mind when creating Maker’s Mark, partnering with Erina and Justin in New York and Sam and Jordan in Sydney to create bourbons that embodied their cities resulted in delicious new whiskies that are a true adventure of their own.”

Manuel González Global Marketing Director of Global Travel Retail for Beam Suntory, said, “With Maker’s Mark, we are excited to announce the new Wood Finishing City Series with the launch of two new whiskies, the New York Edition and the Sydney Edition, available exclusively to Global Travel Retail. Travelers will now be able to get their hands on liquids which capture the character of the world’s most iconic cities, while getting a chance to experience the handmade nature that makes Maker’s Mark so special. We remain committed to offering our customers incredible collectible opportunities across our portfolio.”